Poet, songwriter, author, workshop facilitator, and educator Regie Gibson has performed, taught, and lectured at schools, universities, theaters and various other venues on two continents and in seven countries including Havana Cuba. Regie is a former National Poetry Slam Individual Champion, was selected one of Chicago Tribune’s Artist of the Year for Excellence for his poetry. He has co-judge the Chicago Sun-Times Poetry Competition with Marc Smith and Mark Strand, has been regularly featured on N. P. R. and has appeared on HBO’s Def Poetry Jam. 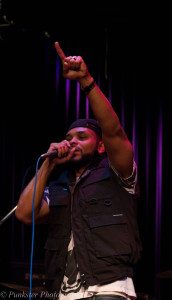 Tem Blessed was born in West Africa and came to New Bedford when he was just a few years old. Growing up in New England, it didn’t take Tem long to fall in love with hip-hop. Before he even took the stage, the artist within him was already born. Tem started rhyming since the time he was a young boy. Seeing hip hop change and evolve throughout the years, Tem wanted to concentrate on making the world a better place. That led him to go green and lobby for a more sustainable world in addition to a better future for all of our children.